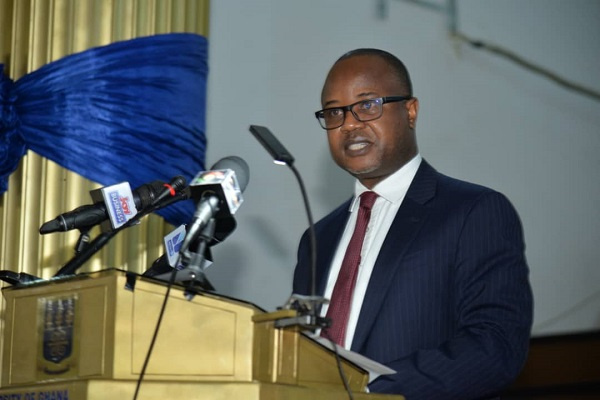 Maxwell Opoku-Afari, First Deputy Governor of the Bank of Ghana

Ghana needs to devise more efficient ways to collect property taxes on residential and commercial properties in the country as part of the measures to increase income, proposed Bank of Ghana Deputy Governor Dr Maxwell Opoku. Afari, at a public lecture hosted by the University of Ghana Business School.

The collection of property taxes in Ghana is administered by local government authorities, he said, “but hampered by the lack of proper records and ineffective collection efforts”.

According to him, “the attraction of the property tax is that the property is not easily hidden from the tax authorities and also often has sufficient references for valuation purposes”.

Dr Opoku-Afair said property taxes levied in many African countries are estimated at less than 0.5% of GDP, compared to 3% in OECD countries.

Mauritius, he said, has made progress in increasing revenue from property taxes, compared to most African countries.

For example, he demonstrated, â€œin 2018, 4.9% of income in Mauritius came from property taxes, significantly higher than the African average of 1.6% and close to the average for OECD countries of 5.3% â€.

These include, in particular, land registration fees; land transfer rights; capital gains tax; taxes on the transfer of leasehold rights on Crown land; stamp duties; among others.

â€œWe can learn from Mauritius and make sure we are getting the proper income from our assets,â€ he said.

â€œAnd recent government initiatives to introduce the Ghanaian map, digital address system and digitization of the land register provide the framework necessary to achieve this goal,â€ he noted.

Dr Opoku-Afari said that the country’s large informal sector has hampered the optimal achievement of tax collection over the years.

The introduction of the Tax Identification Number (TIN) and its subsequent replacement with the Ghana Card is expected to attract a wider base of Ghanaians into the tax bracket and help widen the tax net, he observed, noting : â€œThe replacement of TIN numbers with the Ghana Card has increased the number of registered TIN numbers from around 5 million to over 15 million.

This, he said, “should help bring many more people into the tax bracket in the future and make it easier to collect income from the large informal sector.”

â€œThe informal sector includes micro and small businesses and will require a simplified and modified tax system to bring them into the tax fold. It is for this reason that the recent announcement by the Vice President of the introduction of a modified tax regime is very critical and could unblock the binding constraint on tax collection in Ghana â€.

Citing Georgia as an example, Dr Opoku-Afari said that she introduced a simplified tax regime for micro-small and medium-sized enterprises (MSMEs) in 2010, where companies with a certain threshold of annual income and a threshold of d Very minimum employees are referred to as “micro” enterprises and exempt from income tax.

Businesses with annual turnover within a certain range are referred to as â€œsmallâ€ businesses and have the option of being taxed on the basis of income rather than profits, at a rate of 3% or 5%.

It was one of the many tax reforms that had been introduced in the country.

â€œCorporate tax was also at a flat rate of 15%. Revenue lost from lower tax rates has been offset by a broader tax base, better compliance and strict enforcement. By 2008, with a streamlined tax system, Georgia’s tax revenue-to-GDP ratio had doubled to 25 percent. Other reforms included modernizing the registration, filing and management of payment obligations; and the integration of improved auditing and verification into the tax administration process. The example of Georgia is clearly how we are developing the private sector, with a reduced tax burden, so over time the booming private sector can also increase government revenue. “

â€œOf course,â€ he noted, â€œtax regimes must take into account country specificities, but lessons from Georgia and other countries on how best to tax the informal sector through formalization will support our efforts in this area. Guyana, Cambodia, Liberia and Georgia used information management systems to boost revenue mobilization by computerizing tax and customs administration, automating most processes including electronic filing simplified, the introduction of a one-stop Internet portal as well as the introduction of tax identification numbers.