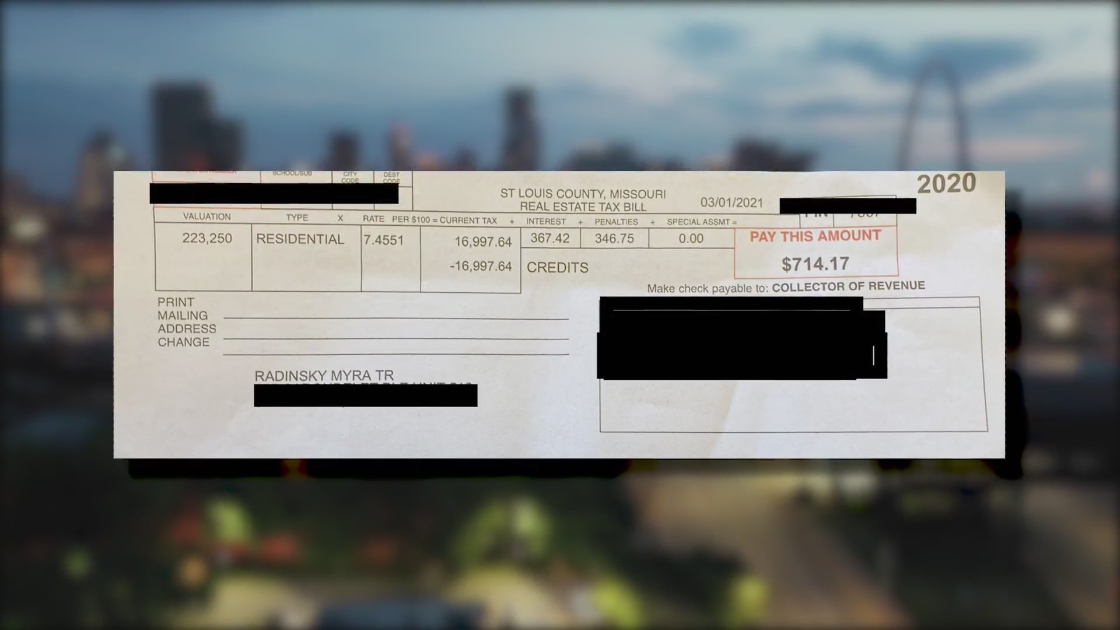 This is an archived article and the information in the article may be out of date. Please look at the timestamp on the story to see when it was last updated.

ST. LOUIS COUNTY, Mo. – Steve Radinsky has helped consumers in St. Louis as a Contact 2 volunteer for more than 20 years. This case affects him personally and professionally. He is one of nearly 5,000 St. Louis County residents to be charged late fees and interest on their 2020 property taxes.

“It’s the pandemic’s fault, but I think we’re all getting a penalty and interest that’s not our fault,” Radinsky said.

On December 27, 2020, he says he deposited his property tax check at the Clayton post office. He knew he had to be postmarked by December 31, 2020.

“It never even occurred to me that it wouldn’t be postmarked that day or even the next day,” Radinsky said.

Overdue tax bill notices sent to some in St. Louis County who claim they were mailed on time

That was until early March. The Radinskys received a bill from the St. Louis County tax collector. He said they owed $714 in late payment penalties and interest. He learned that the check he sent on December 27, 2020 had not cleared until January 2, 2021.

“It’s really the Post’s fault, but they were going through a tough time with a pandemic,” Radinsky said.

The St. Louis postmaster took responsibility for the late postmark, apologized, and offered to give the revenue collector an explanation. Unfortunately for Radinsky, state laws don’t provide a simple solution.

“They have a law that says if the county was at fault doing that, they could appeal to me and they could reimburse me. But because the feds are at fault, they can’t do it,” Radinsky said.

Missouri State Senator Jill Schupp (D-St. Louis County) is one of many lawmakers and officials we have contacted about the matter.

“They are subject to penalty and interest that I don’t believe they should be subject to. What we’re trying to do is find a vehicle that will allow for an amendment related to this that will defer the return of that money for up to a year from what’s due next year for personal property taxes says Schupp. “So that the taxpayer gets their money back and that the counties have time to let those tax districts know that they will be short of that money next year.”

With the legislative session ending next week, Schupp hopes his amendment to Bill 271 will help solve this problem for citizens like Steve Radinsky.

“I think everyone here in the legislature, regardless of what we see in terms of different policies, understands that we don’t want our taxpayers to be unfairly assessed,” Schupp said.

Senator Schupp urges anyone affected by penalties and interest on their property taxes due to a late postmark to contact their state representative. We will, of course, let you know the fate of his amendment when it passes through the Missouri Legislature.

“It’s not just me. I think there are probably hundreds or maybe thousands of other people out there,” Radinsky said.

How deferred interest donations can save on future estate taxes